The big picture of software development

Very often when I have tried to understand certain situations that have cropped up over the years and tried to explain where I believe the problem lies, I find myself using a certain simple model again and again. I should have written it up a long time ago, but better late than never, eh?

The model is based on the fundamental questions of Why, What and How.

Why do we exist?
That’s a pretty philosophical question. However, in the context of why we as developers exist, why we are needed, why companies pay us to write code, I believe the reason is that we are expected to create business value. That answer would seem to be pretty reasonable for most people in most situations.

What is it that we do to create business value?
I think the answer to that question is code, great code! It's not only the code itself, but its surroundings too, like tests, docs, build scripts, and such. Yet the very code itself is of crucial importance.

If we are in control of the code, then the business people can come with a request for a new feature that will create a new business opportunity and we can achieve it in a matter of, say, a few weeks. A couple of changes in the codebase might translate into millions of dollars. That codebase leads to high business value and the cost for achieving it is low.

The opposite is a codebase that has rotten to the extent that nobody dares touch it at all. The developers walk around it, they even leave the company just so as not to have to work with it. That codebase might need years before it can achieve the afore-mentioned business opportunity. Time to market, risk and cost of change mean that the business value of this codebase is very low.

(There are of course ways of transforming a bad codebase into a great one, but that's another story.)

How do we create great code?
How you achieve great code varies. Some techies would spontaneously suggest Test-Driven Development (TDD), Domain-Driven Design (DDD), architecture-focus, refactoring, and so on. You just add here what works for your team, the stuff that let your codebase add business value.

What I find over and over again is that a good many companies have focused all their attention on implementing a new process. Which process doesn't seem to matter, it varies over time and lately it has been Scrum. It has been seen as a panacea. At first it seems to go very well, but after just a few sprints, the velocity drops. The reason is that the codebase and the architecture haven't received any attention at all... Sure, a suitable process can often help a good team to become even more productive, but it won’t compensate for lack of skills. So, I added "Iterative process" as an example of something that is part of the picture for achieving good code. My point is just that it’s most definitely not the only thing, of course it isn’t. (Also read my factor10 colleague Niclas' blog post called "The holistic view".)

If I had to pick the one answer to how, I believe that the single most important way of achieving great code is to have the best people that you could possibly find. To have only a few, as few as possible, but not fewer. On top of achieving great code that would actually also let you achieve it cheaply. Of course you would have to pay more for the best, but they will be extremely productive (for real, not a fake) and since you only have so few, that also makes the financial side very appealing.

In the same way there is the comment about companies believing they need expert help from the vendor of the product they are having trouble with. To me, that's a smell regarding that product.

"We can't solve problems by using the same kind of thinking we used when we created them."
--Albert Einstein

To summarize what I said above, here's a sketch: 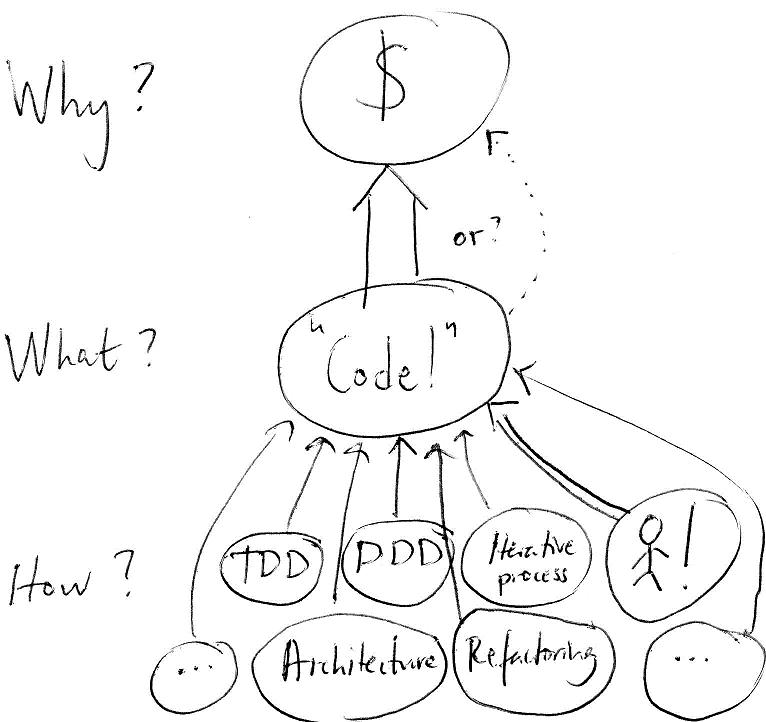 Some more comments
Techies immediately seem to agree with this model. But, and this might come as a surprise, business people seem to like it even more. They might say something like: "So that's why the developers are complaining that I don’t value quality. I used to think it was just whining, but now I realize it's about sustainable business value."

Quite often I find that developers ask questions such as: What feature shall I do first? Where shall I focus my refactoring efforts? What automatic tests are the most important? According to this model, there's a clear and simple answer to those questions that points us in the right direction. Choose whatever gives the most business value.

A colleague of mine goes as far as using the code quality of the important codebases for determining if a company will have a chance for success or if it will go out of business. If we aren't fully in control of the codebase, that's a setup for failure. (Obviously, these companies are not automatically doomed, not if they grasp the situation and act with power and intelligence.)

So, the codebase is probably quite important, perhaps the most important asset of the company. It's not something you allow just anybody to work with and make changes to. It's like if you need brain surgery; would you allow someone who had just done a crash course in brain surgery to operate? Of course not, you would probably try to find the best and most experienced person there is. That’s quite the opposite approach to how codebases are dealt with in many companies.